I *will* get us a good family GIF. 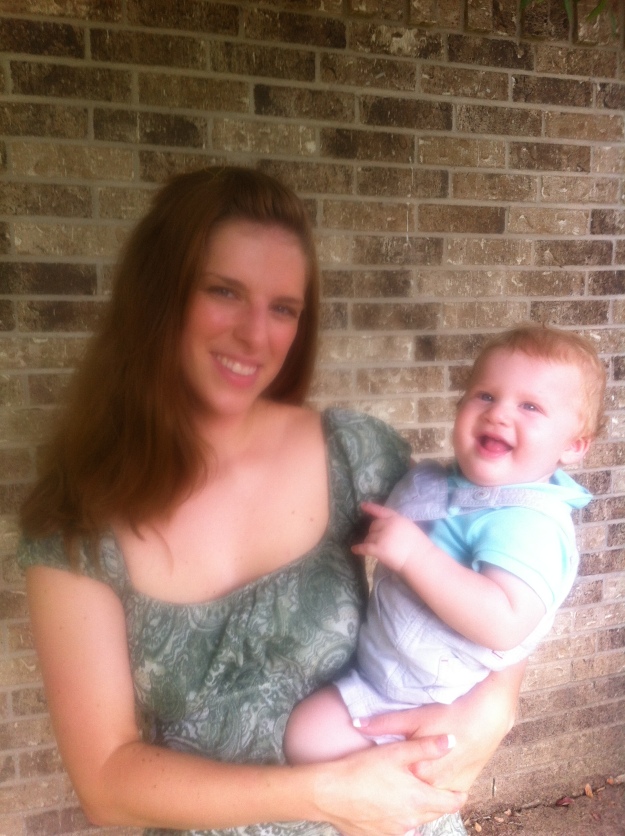 I took you to ‘The Little Gym’ playgroup today. The group was for 10 months plus, but the younger groups do not meet at the weekend. We decided to see how you would do in a group for older children. You tried everything. With only one other crawler (a strapping 13 month old), you still kept pace with the big kids. As the group was reaching the end of their semester, they were far into the moves; today was ‘finishing off’ tumbling. You have never tumbled, but you tried. You rolled over the blocks on your tummy, stretching your hands out for the ground. You were not so impressed at the idea of ‘tucking your head under’, but you let us flip your legs over your head. You looked confused – why were we doing this? Wasn’t just crawling sufficient? But, OK, you were game – and you even let us do it backwards. You let Miss Nicky use you as a demonstration baby for the class, although you kept casting glances at me to make sure it was OK. You sat in a large foam donut while we span you round and around on a parachute singing our ‘A, B, Cs’. Again, you looked confused [why do adults do such weird things?], but after a moment you looked resigned, and despite the crying toddlers around you, you smiled and clapped along. Thank you for humoring us. You were adventurous, you were fun, you were brave and you were sweet-natured. 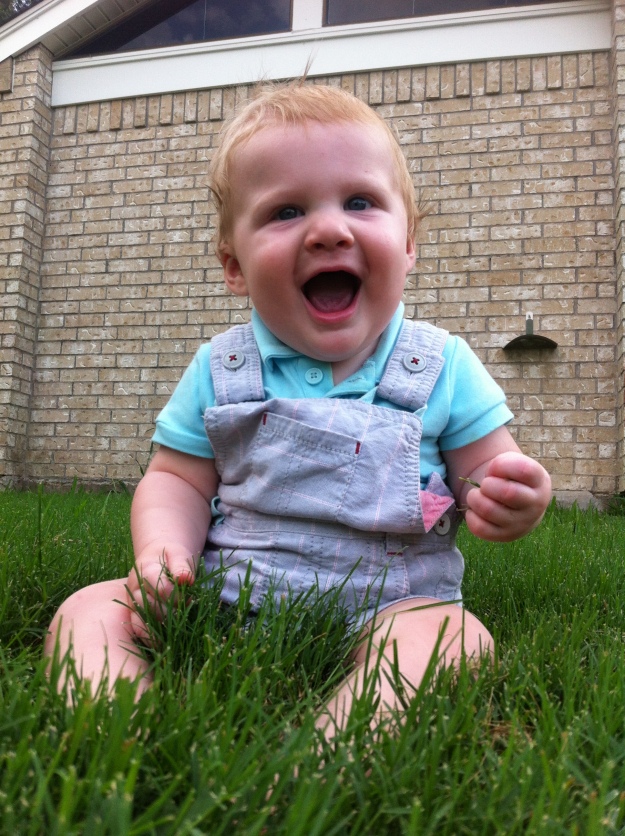 When I think about what this day means to me, I think about independence. I think about 265 days you were in me. For 257 I knew about you. For another 5 I suspected you were there. I spent 262 days working so hard to keep you safe inside me. I fretted over every can of mini Diet Coke, I worried about your stress when I had dental surgery, I choked down vegetables when I could. Then you came into thid world and you were even more vulnerable. Tiny, so tiny. You couldn’t even control your eyes. As parents our job was clear: to love you and nurture you so that you felt safe enough to leave us and gain independence. As much as we wanted to hold you close to us endlessly, we saw our job, very clearly, as being to give you the skills you needed to function in this world on your own, although we are always behind you. And you have! You go to bed on your own, in your own room, with ‘Mr Wolf’ to keep you company. You play in your room by yourself, pushing your cars along and shaking your tambourine, for ages at a time. 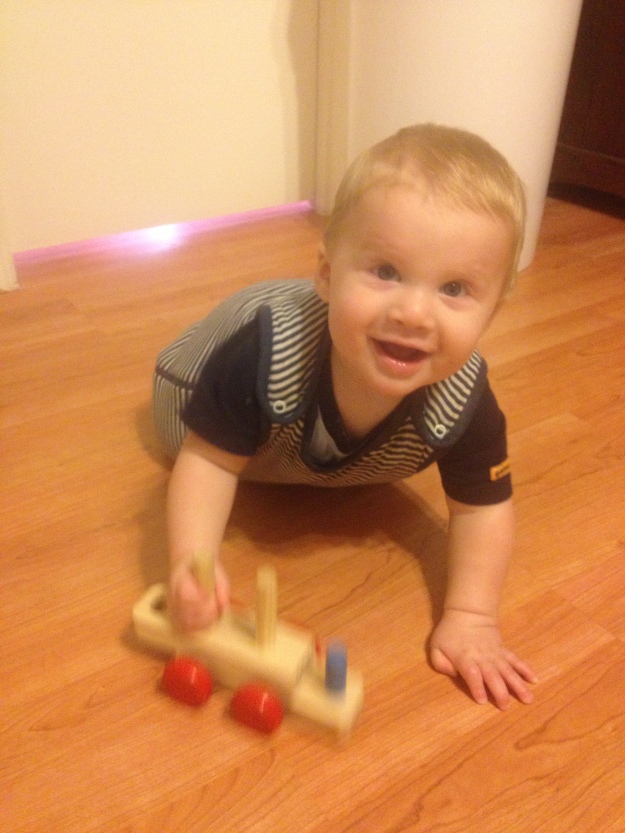 You feed yourself, and you talk: you tell us when you want breakfast, or your bottle, and when you need your Mama. 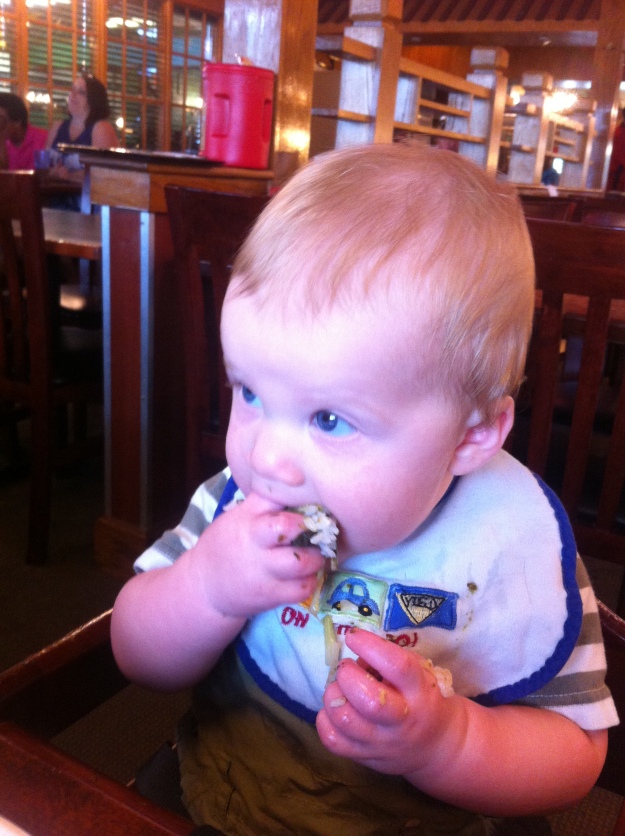 I see in you the ability to take the world on, to meet challenges head on, and step outside of your comfort zone and rise up a level when things are difficult.

Learning how to play 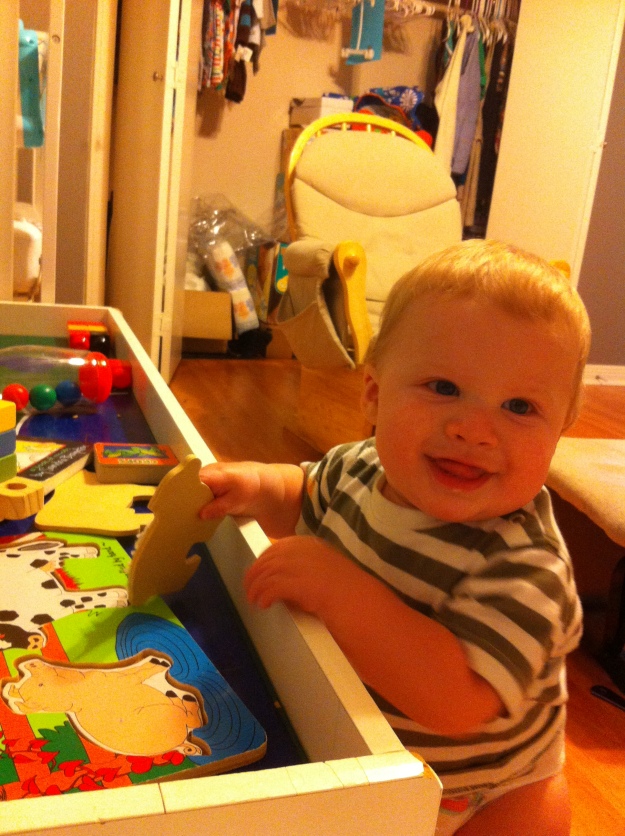 Putting your aquarium on for bedtime

But more than we have given to you, you have given to us. You love us unconditionally, and despite all our mistakes, you have turned out pretty damn brilliantly. You bought out Daddy’s best side: he looks after us so well. You have made him build us a home, and fiercely protect us, but with gentleness. You have taught me to trust myself and to trust my decisions. You have taught me flexibility and not to judge others. You taught me not to sweat the small stuff – what was stopping breastfeeding early, in return for all the hours we got together? And from the unconditional love you have given me, from your first word being a very clear “Mama” said with outstretched arms when I was off to work, you have taught me that I am worthy of love and that I earn it: I have the love I earned well. You, in learning to be independent from me, gave me independence from my insecurities.

I am so grateful to you. 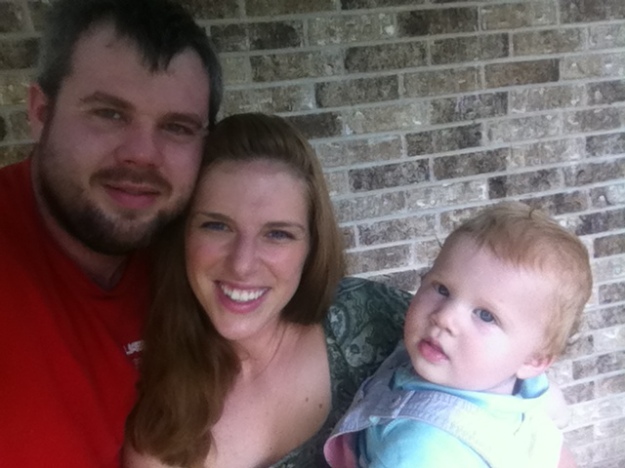 I am, and always will be, so proud of you.

May this journey be long, and may we always be hand in hand, even as we forge our own paths.

I am so excited Prince George has made a safe and healthy entrance into the world. I read some of my American friends criticizing the news (and one British) and having ‘mixed emotions’ about what the monarchy stood for. Although I may be a noisy political advocate for many causes, this was not a political cause for me.

I guess at the heart of everything, I do not have an intrinsic problem with the monarchy. They return more money to Britain than they cost, they don’t interfere with everyday life, but they do try to do some decent charity work without too many bells and whistles (LOVE Prince Charles quiet support of organic farming, and much as I did not like Diana, she did amazing work to remove a lot of stigma from HIV patients). And, all countries need their identity; the monarchy is part of ours and if not something to be proud of, to me, not something to be particularly ashamed of.

So, for me, as my heckles do not get raised by the mention of the monarchy, the Royal Baby story was just a story about a young couple, who fell in love, and had a baby. All the criticisms: they didn’t swaddle properly! She came out after only 12 hours! She has a manicure! She can’t nurse in that dress! She showed her belly! All those bitchy little comments just reminded me so vividly of my first few days (months?) as a parent. 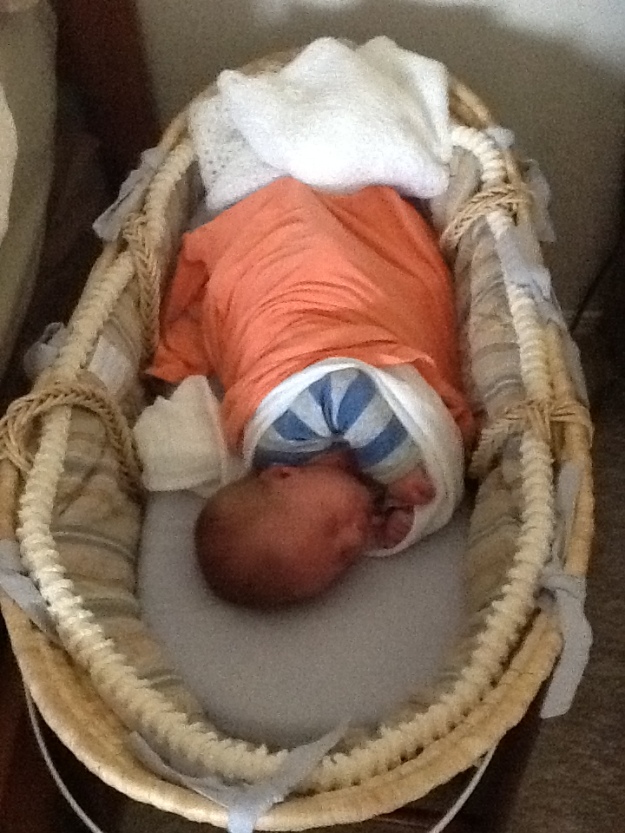 I failed utterly, utterly, at swaddling, despite great instruction from my Bradley Method teacher, AND getting the nurses to show us how to do it several times in hospital AND having step-by-step diagrams in ‘The Happiest Baby on The Block’. I just said: Thank goodness for ‘swaddleme’s [and for the friend who bought me three]. 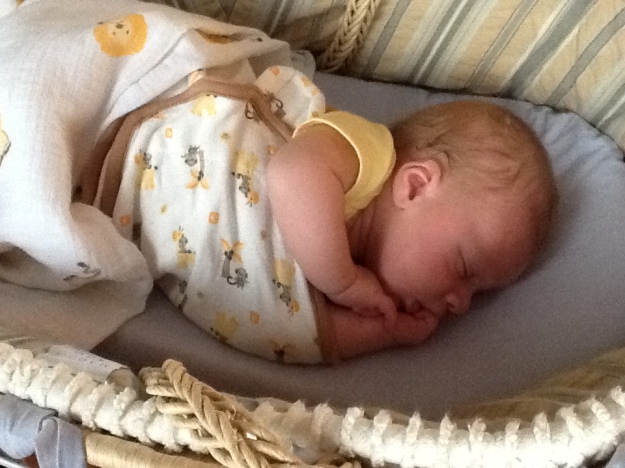 I was utterly confident I could see people immediately, even though I was clearly very sick, and visitors were not allowed in ICU anyway. But I was on a great high – I was utterly in love with a new little human. I was convinced her was the cutest / most well-behaved / smartest baby ever, and I just wanted the world d to meet him.

What do you mean I am not ready for visitors? But I invited my colleagues over for cupcakes (no… I really did…).

OK, I didn’t have a manicure, but as soon as I was able to unhook myself from my IV I scuttled off to bathroom and put make-up on (which in retrospect, because I was deathly pale and swollen from blood loss, just looked vaguely clown-like). Had I been able to have a full shower, you can bet your bottom dollar I would have had a blow-out (I got the straighteners out as soon as I got home). 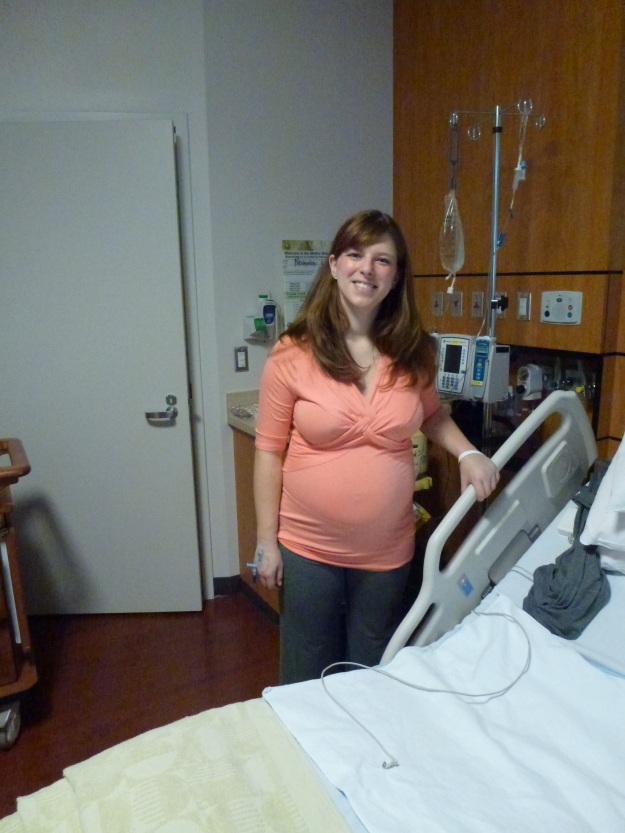 Yes Lekki, you look awesome. Not deathly pale with clown-like levels of blusher at all. AT. ALL.

Nursing clothes? Messed that up. I found my clothes were totally inappropriate for nursing, especially in those first few days when you haven’t got your technique down. Even when Wes went and bought me special nursing tops I got lanolin and milk all over them. C’est la vie.

And as for that belly? And the ‘Did Kate decide to show she was normal?’, “Did Kate purposely show her belly?’ question. While I applaud Kate for not getting into a girdle, I suspect she, like me, had no idea what people meant when they said ‘you’ll still look 6 months pregnant when you leave’. Seeing that I barely put on 4 lbs of non-baby weight, while I heard people say ‘take maternity clothes’, and I heard them tell me my belly would take weeks to go down, I was used to stories of Alex Curran leaving hospital in her skinny jeans, and I didn’t really think the ‘6 months pregnant belly’ would apply to me. Boy-oh-boy did it 🙂 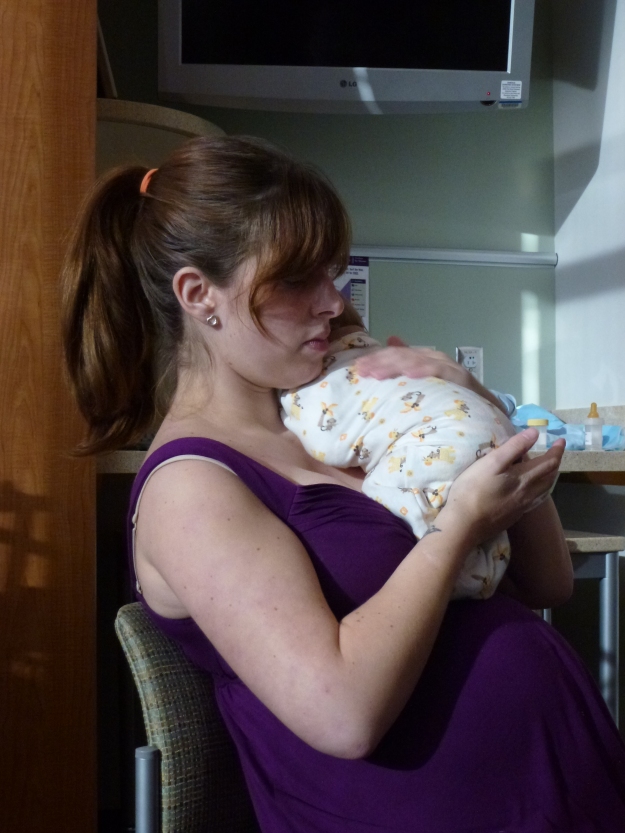 They were not mistakes, they were just ‘learning to be a parent’ moves. They were just a reflection that nothing can really prepare you for EVERYTHING it is to suddenly have a brand new newborn. You can read books, you can visit friends, you can watch videos, but as soon as you have that little thing in your arms you realize you had NO IDEA what it is going to take.

And that is why I love the Royal Baby news: I guarantee that at this moment, Kate & Wills are not marveling over the heir to the throne, or thinking about the press, or planning their every move. They are completely and utterly absorbed in their new one, wondering how to be come parents, and blown away by how clever they are to have bought the cutest / most well-behaved / smartest baby ever [apart from mine] into the world.

Reliving that special time through them is wonderful. Tomorrow marks the exact number of days, since Sam’s birth, that reflect the time he was inside me (i.e. from ovulation to birth). I am fairly emotional about that, and hearing about wee Prince George just warms my heart and reminds me this is the best thing I have ever done. 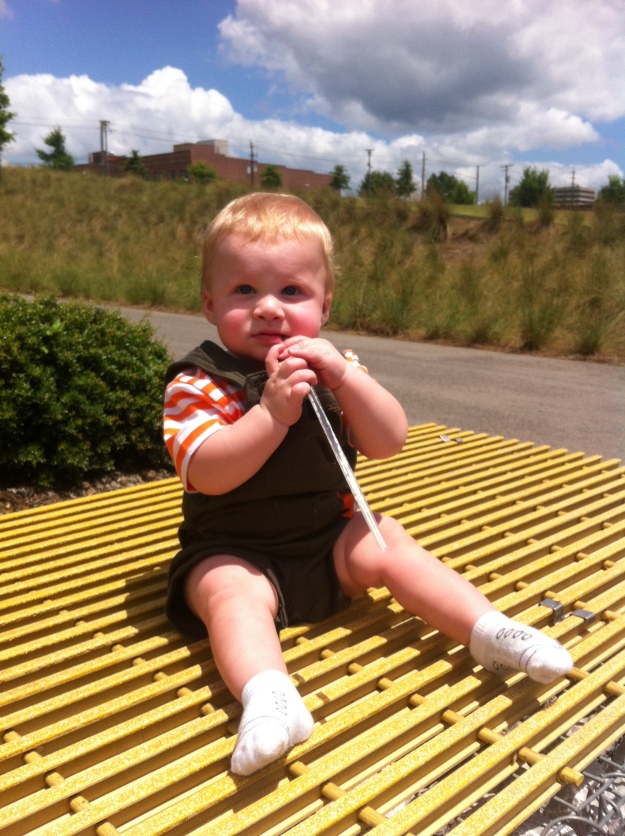 Oh, and I am not proud of this, but we also didn’t get the car seat right:

Not a good way to strap the wee one in

Chest strap too low, head not properly supported, and in fact, should have had side impact protection (Sam was very small!). We’ll do better next time.

It’s been way too long since I posted. All is well, I am just enjoying my new MRSA-free status and have not yet figured out a time to blog which fits arund Sam’s new schedule and my Candy Crush obsession (what? Hey, at least I am honest). Sam is barely the same child as in my last post given that he now talks and (almost) walks, we have a new addition to the family (4 legs not 2) and I have several gripes  helpful musings to share about academia.

I will write about them soon, but in the meantime, this was too ridiculous not to share – Wes and I have our own .gif courtesy of our wonderful church Ecclesia (also another post in the making). We thought it would be a still photo, so we didn’t manage to do something awesome (aside: when did I become the old person who didn’t understand the technology?). C

lick on the image to make it move.

Now… all we need is a suitable caption, worthy of Jezebel’s gif genius. Note, those gifs also deride Fox News and Religious conservatism, so that link serves many, many wonderful purposes.