This is post is hard to write because I am embarrassed and ashamed. But for some reason I want to tell this story.

I have never been a dog person. To be honest, my feelings towards dogs have always been between indifference and active dislike. Don’t get me wrong, I would be nice to dogs I met if I had to, but my feelings on dogs? Meh. 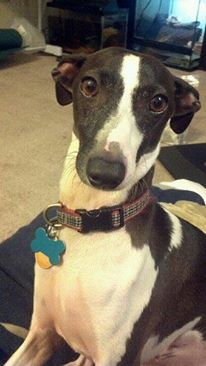 And then Walter came into my life unexpectedly and beautifully. I was suffering from horrible depression as the side effect of a drug, and when I found Walter in an Alabama trailer park, I knew he was my solution. This post is not about Walt but trust me: he was a special dog. An old soul in a young body. A characterful snuggle bug. My running partner and my nighttime companion. My Halloween dinosaur.

Two years after Walt found his forever home with us, he died very suddenly . I was upstairs sleeping in after several night feeds, and Wes screamed for me. To this day, we don’t know what happened, although since CPR was not able to inflate his chest we suspect he swallowed something. All I do know is that after a very difficult 2 years, life was finally starting to look good for me, and Walt left. He stayed with me when I needed him and when his work was done and I was good, he was gone.

I then did the silliest thing possible; in a haze of grief I ran to the pound and rescued the first dog I liked (and there were plenty that I didn’t…)… And into our lives came Ellie. Ellie was different. She was bright and energetic and not brilliantly house broken… But her cardinal sin was that she wasn’t Walter. And so things started to slide.

Ellie’s life descent is tied up in so many issues. There is the issue that I felt that as a SAHD Wes’ job was to walk the dogs and he didn’t walk either – not even his own. I was resentful. Tjhere was the issue that I felt I couldn’t take Ellie out without taking Wes’ dog out (he would howl as Wes didn’t walk him) and I didn’t want to take him out. Because I didn’t want to do “Wes’ job” (aside: this is a terrible model of marriage. I’ve moved on from this somewhat). The issue that when Wes’ dog died he felt Ellie was going to stop him getting the dog he wanted… And that he never wanted Ellie anyway. There was the issue that Ellie has a slight incontinence problem so couldn’t come to bed with me and I resented her for that fact that neither she nor Wes came to bed with me and I was lonely. And the issue that she wasn’t Walter and Walter had left.

So we entered this terrible spiral where I neglected Ellie (emotionally – she was fed and watered), so she became more demanding and more naughty (pottying in the house etc) which irritated me, and made Wes really mad, and so I neglected her more… So she behaved worse, so I neglected her more and so on until I came home one day and Wes said “she has to go”.

And I was mad! Mad that he never got rid of his neglected dog (Earnest had health problems which Wes wouldn’t sort), mad that he wasn’t helping, mad at myself and suddenly aware of how much I like Ellie’s sweet nature, her unconditional love, her ability to forgive in an instant… All this. That she was loving and curious, and playful and a people pleaser. That her energy was enviable and inspiring. But it was too late.

In the midst of several marital rows, I told this story to a friend who owns three dogs. Her response was to tell me that she wasn’t a dog person either but as soon as she got her first puppy, the second she saw him, she knew no one was ever ever coming between her and that dog. That was it. She would kill for him. And I decided: OK! I love my dog! No one is coming between us! Screw you husband!

So I stepped up the plate. I bought Ellie some decent food and some treats and some toys and a comfy crate for my car. I started walking her twice a day, except for Thursdays which are my crazy early and late days when she goes to doggie day  care. I was strict about crating her when I wasn’t around (so no poop in the house) but being with her when I was… She curls up on a bed by my desk, she curls up on my lap, she comes for car rides and she comes to bed occasionally with a doggie diaper on (not even kidding here folks). 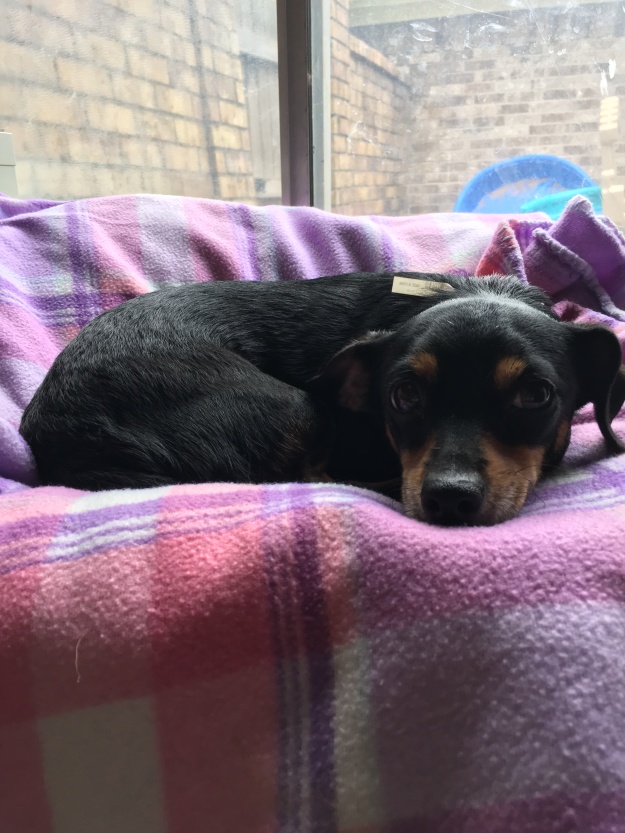 And she behaves well. She walks ‘loose leash’ beautifully now, she obeys (unless she really doesn’t want to go outside to potty when she does go to her crate), she rarely jumps up. And I fell (back) in love with my companion and things are working out. 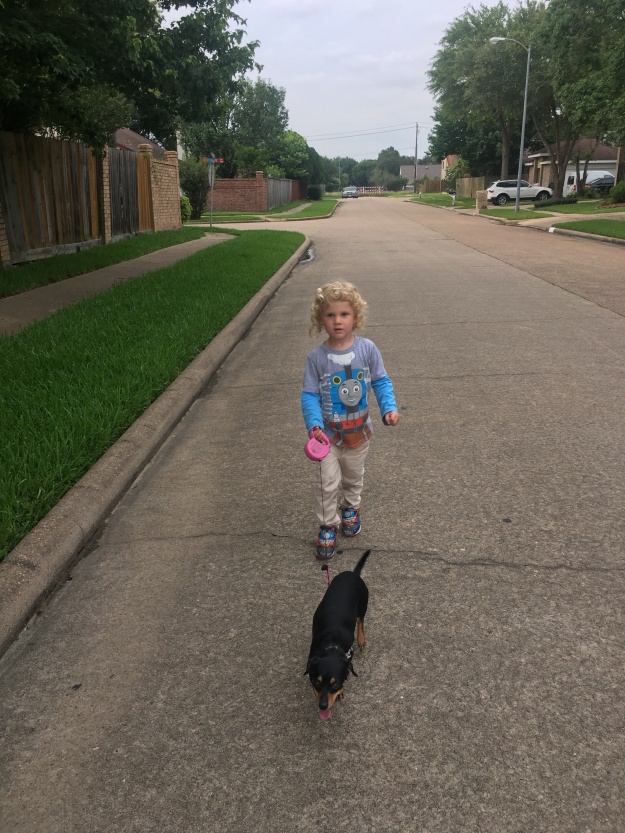 But something else magical happened. I began to feel better about myself… Finding time to walk a dog twice a day with a full taken job, a breastfed 7 month old and a toddler is in a city where my commute is an hour each way is no mean feat. But I did it. I made sure it happened. I weathered 90 degree heat and thunderstorms. I let go of having to leave the house at a set time, or go to bed at a set time (sadly, I have also currently let go of washing my hair more than weekly. OMG I can’t believe I admitted that) and relaxed and felt good that I could I achieve this.

No matter the weather

Even better, because Sam always wanted to come on the walk, and Caroline had to, I began to have 40 minutes a day with my kiddos! We ran, we played hide and seek, we went down slides and on swings and shared the task of holding El. And we loved it! If I offer Sam to drive to the park he says that no, he would rather walk. The nagging guilt that my kids are not outside enough is gone. The nagging guilt that I ignore them a bit is diminished (not gone, because let’s face it, I still use my iPhone at the park…). Ellie has made me feel better about myself and my family, brought me love and a little daily joy. 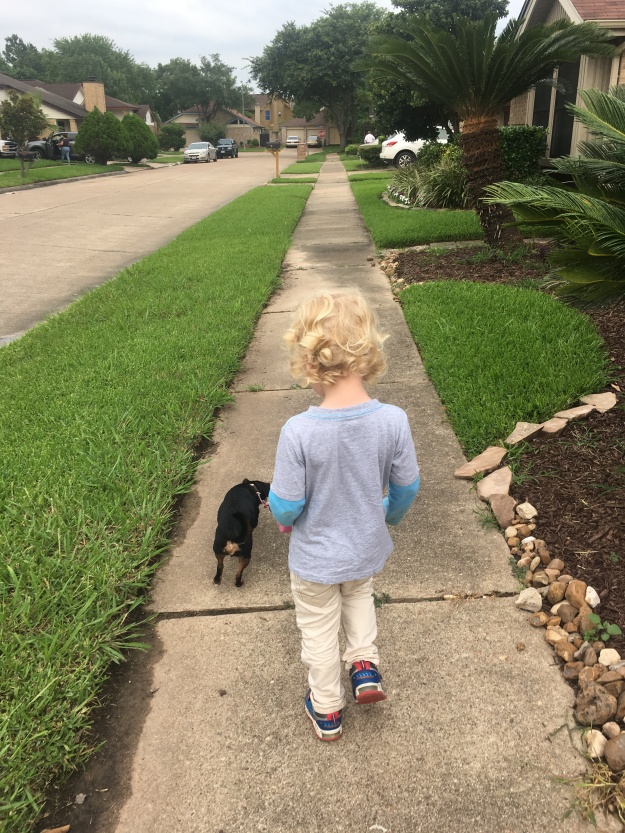 I see Ellie now as she is. Sweet, and forgiving. Fun. I love her energy. I wish I had her capacity for loyalty and unconditional love. Her patience. Her companionship warms me.

I used to think that Walter came into my life when I needed him and left when I didn’t, but Ellie just happened. Now I know that she was there when I needed her, patiently waiting to heal parts of my life. She is just as much my guardian angel as Walter.

Ellie, I am so sorry. But this is your story.

There was an error retrieving images from Instagram. An attempt will be remade in a few minutes.